The Daily News reports that San Fernando Valley residents are boarding trains to get to jobs near the Expo Line -- in an unusual commute that takes them east to ultimately end up west: Valley commuters are catching the Red Line from the North Hollywood or Universal City stations, transferring to Expo at 7th Street in downtown LA, and then heading back west -- underscoring the growing frustration with the traffic-clogged San Diego (405) Freeway, and the jammed-up canyon roads that offer the only other north-south option. Read the story here.

NYT STORY ON BEVERLY HILLS HIGH SCHOOL VS. THE SUBWAY

But the claim that tunneling would create a risk remains unsubstantiated. Read the story here.

And the Orange Line Bus Rapid Transit line will be open until 2:40 am to accommodate anyone getting off the subway in North Hollywood. Service is to begin the weekend of July 27-18. Read about it on the Source.

While the funding authorized is below the levels sought in President Obama’s budget, Secretary LaHood has acknowledged that the new law is a good bipartisan bill that will provide steady and predictable funding for the next two years in order to keep construction workers on the job rebuilding our transit systems, roads, rails, and bridges.  Consistent with the President’s budget proposals, MAP-21 consolidates certain transit programs to improve their efficiency and provides significant funding increases specifically for improving the state of good repair of our transit systems.

MAP-21 will take effect on October 1, 2012. Until then, we will continue to manage our current programs under existing law (SAFETEA-LU), which expires on September 30, 2012. FTA is already hard at work on a plan to implement the new law and develop new guidance and information for our grantees, other stakeholders, and interested parties.

Here are some highlights from the bill:

Looking forward, I must ask for your patience as we take the necessary steps over the next several weeks to prepare for full implementation of MAP-21. Our goal is to provide clear, consistent, and timely information. Please be aware that as part of this transition, we will need to prioritize agency actions and resources to focus on implementing the new law.

Let me strongly encourage you to watch our website (www.fta.dot.gov/map21), where we will post and update useful information as it becomes available. You can also sign up for timely e-mail bulletins here.

Enactment of the MAP-21 law signals yet another opportunity for us to work collectively to strengthen our transit systems and better serve the American public. We at the FTA look forward to working with you and your stakeholders to address the challenges laid out for us by Congress and the President in MAP-21.

HUFFPO: TRANSIT PROBABLY WON'T TAKE YOU TO WHERE THE PAYCHECKS ARE

Now that so many jobs are located in the suburbs, where there's less public transit, getting to a job can be as difficult as getting a job: In the nation's 100 largest metro areas,  two-thirds of all jobs require a 90-minute transit commute.

In LA we are lucky. Measure R will provide transit connections to another 1-2 million jobs. 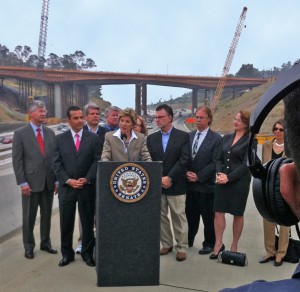 Although most of the news media and the local political community have treated this effort with great indifference, approval of America Fast Forward is one of the most important transportation developments in recent local history. READ MORE AT LA OBSERVED.

This just in from CQ Today Online News, by Nathan Hurst and Niels Lesniewski In a rare moment of agreement, Senate leaders from both parties expressed optimism Tuesday that a highway bill deal can be negotiated by the end of the month and dismissed the House GOP talk of an extension as premature. “I don’t even want to talk about it now,” Senate Majority Leader Harry Reid, D-Nev., said of the possible need for another extension. “I think that we could surprise everybody and get a bill done here.” Minority Leader Mitch McConnell was also upbeat. “We have until the end of the month,” said the Kentucky Republican. “And we’re hoping that they’re going to come up with a solution here.” House Speaker John A. Boehner, R-Ohio, warned conferees last week that if they cannot reach agreement before the current short-term authorization (PL 112-102) lapses at the end of the month, he will offer a six-month extension that would kick the issue of surface transportation funding into the post-election session. Senate negotiators were sending responses Tuesday to the latest highway bill counteroffer by House negotiators. “I feel there is movement,” said Sen. Barbara Boxer, the conference chairwoman. The current negotiations focus largely on the core transportation issues. Yet to be dealt with are demands by House Republicans to include in a conference report language forcing approval of the Keystone XL oil pipeline and limiting the Environmental Protection Agency’s ability to regulate coal ash. John D. Rockefeller IV, the West Virginia Democrat who chairs the Senate Commerce, Science and Transportation Committee, said Republicans should not expect to win on either issue. “I think they still want both,” Rockefeller said. “They’re not going to get them. I think the pipeline is really off the charts, and coal ash I do too, for this bill.” Conservative House Republicans have threatened to walk away from a final version of the bill (HR 4348) that omits those provisions. But the House’s sound rejection last week of a motion by Georgia Republican Paul Broun to instruct House conferees to insist on limiting fiscal 2013 spending to the amount of money available in the Highway Trust Fund — rather than supplementing the fund with other tax revenue — may have weakened the conservative bloc’s leverage. Broun’s motion was defeated, 82-323, with 145 Republicans joining Democrats in opposition. The vote suggested there could be significant bipartisan support for a deal at a higher spending level. But a deal is not yet in hand. Reid’s proposal to leverage two pension changes to save an estimated $17.5 billion and help offset the cost of the highway bill and measures (S 2343, HR 4628) to prevent a doubling of the interest rate on federally subsidized student loans received a tepid response Tuesday from Senate Minority Whip Jon Kyl. “The only problem with it is if you use it [on the student loan bill],” the Arizona Republican said, “it’s not available on the highway bill.” Senate Finance Chairman Max Baucus, D-Mont., and House Ways and Means Chairman Dave Camp, R-Mich., are looking for offsets of more than $10 billion to pay for the highway legislation.

METRO'S "CALL FOR ARTISTS" FOR PUBLIC ART AT 7 STATIONS

LA Metro has posted a "Call to Artists" on The Source blog for designs for seven new rail stations along the second phase of the Expo Line in West LA and Santa Monica. Artists are invited to submit their qualifications, and one artist will be selected for each station. Prior public art experience is not a requirement. Deadline is July 2. Check it out here:http://thesource.metro.net/2012/06/07/new-artist-opportunities-along-the-expo-line/?utm_source%3Drss%26utm_medium%3Drss%26utm_campaign%3Dnew-artist-opportunities-along-the-expo-line