One-fifth of All New Housing Built in DTLA in Past 15 Years! 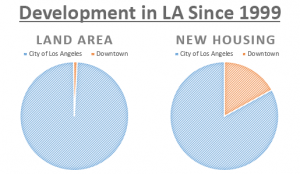 In a city of 470 square miles, DTLA is just a 5-square-mile speck, barely 1% of the land area. And yet, since 1999, approximately one-fifth of all residential construction has occurred there. And there's lots more coming. Nearly 20,000 units have been built since the approval of the adaptive reuse ordinance in 1999. Another 20,000 are in the development pipeline and likely to be built in the next 5-10 years. This has made DTLA a Walker's Paradise, a Top 5 World Destination, and America's Next Great City.

But it doesn't bode well for affordability . . .