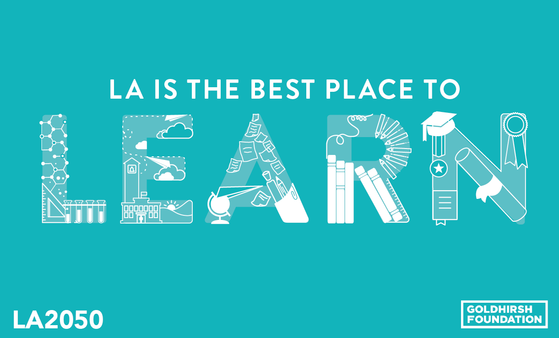 Move LA's submittal to the Goldhirsh Foundation's annual LA 2050 grants competition asks for funding to work with Metro and community colleges to institute a pre-paid fare-free unlimited access student transit pass program in LA County. PLEASE VOTE FOR OUR PROPOSAL HERE. VOTING IS ONLY OPEN UNTIL NOON ON NOV. 3! The Metro Board voted unanimously to investigate the feasibility of a program and we want to work with Metro on program design. Move LA Executive Director Denny Zane helped develop Santa Monica College's very successful "Any Line, Any Time" program — 40% of all students, faculty and staff now take the Big Blue Bus to school.

As LA County continues building transformational transit projects, Move LA is interested in creating a “transit-responsive” culture where people decide where to live, work, shop and play based on the proximity of transit. We believe fertile ground for this effort lies with college students, so we are proposing a campaign to provide students with fare-free universal transit passes that are pre-paid with subsidies from the state’s GHG Reduction Fund, other sources such as air quality subvention funds, and a very small increase in student registration fees.

Dr. Donald Shoup and other UCLA researchers studied 35 such programs from around the US in 2001 and found the average cost to be $30 per student per year — as compared to Metro's current student transit pass program, which is only offered to fulltime students and costs $43 per month.

If correctly designed this program could be a win-win-win-win! Programs around the US have demonstrated dramatic increases in student transit ridership, and significant reductions in student driving, the need for campus parking, traffic congestion, air pollution and GHG emissions. Moreover, most community college students work to support themselves through school, and transit passes can also make it easier and cheaper to get to work. Because students can fill empty seats on transit, it will boost overall ridership and reduce the cost per rider of operating transit. A program like this now that the transit system is expanding could create a transit-responsive culture and transit riders for life!

We’d like all 26 transit operators in LA County, not just Metro, to offer these transit passes at all colleges and universities. But community colleges may be the best place to start because most students are local commuters, would be likely to use transit passes, and to stay in LA County after graduation. More than 400,000 students attend 21 community colleges in LA County. Many come from the poorest neighborhoods and some commute as much as 30 hours a week to several campuses to get the classes they need. 75% work at least part-time and can’t carry a full load of credits, so they don’t benefit from most existing student transit pass programs because they require fulltime student status.

School is hard enough. Move LA believes getting to and from school shouldn’t make it harder!

Please vote for our proposal when voting begins on Oct. 20, and ends on Nov. 3!!!