Why Our Proposal to Metro Reduces Traffic? 29 Rail Connections 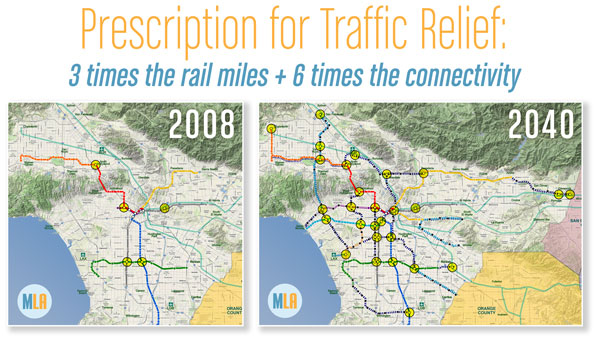 Why do we think a Metro rail and transit expansion as we propose it will increase ridership and help reduce traffic congestion in LA County? Because this plan will create a far more extensive system with dramatically improved connectivity, and significantly greater investments in first-last-mile improvements that make it easier to get to stations. (Check the maps above to see what we mean, and see our official proposal here.)

What do we mean by "far more extensive"? Now there are 73 miles of rail transit. When we build all the rail projects that were funded by the 2008 Measure R sales tax there will be 176 miles. By 2040 there will be 243 (if Metro puts a funding measure on the ballot that's similar to our proposal and voters approve it). That's triple the number of rail miles.

What exactly do we mean by “dramatically improved connectivity”? Connectivity is where two lines connect at the same station and where riders of each line can transfer to another line. Increased connectivity means more riders have convenient access to more lines and many more destinations, and ridership increases as a result.

Today there are 9 rail lines (4 Metrorail lines and 5 Metrolink lines) radiating from downtown LA into the 4 corners of LA County, but there are only 5 stations where a rail line connects to another rail line or to a bus rapid transit (BRT) line like the Orange or Silver lines. With the investment from Measure R—and if the next ballot measure funds a proposal similar to ours—there will be a total of 29 stations that connect rail lines and bus rapid transit lines outside of downtown (where there are many connections), changing what had been essentially a hub-and-spoke system to one that is more like a web. That's 6 times the number of rail connections we have now!

What this web creates is a network that captures significantly more origins and destinations, creating multiple opportunities for increased ridership.

We also propose a significant expansion of first-last-mile pedestrian, bike and shared-use connections, as well as more opportunities for transit-oriented community development—development that we believe must be made affordable enough that frequent transit riders can live near transit together with people of moderate incomes even if there's gentrification.

This enhanced connectivity together with more walkable, bikeable, affordable communities near transit together constitute the “secret sauce” that can significantly increase future transit ridership—definitely the right prescription for traffic relief! READ OUR PROPOSAL HERE.