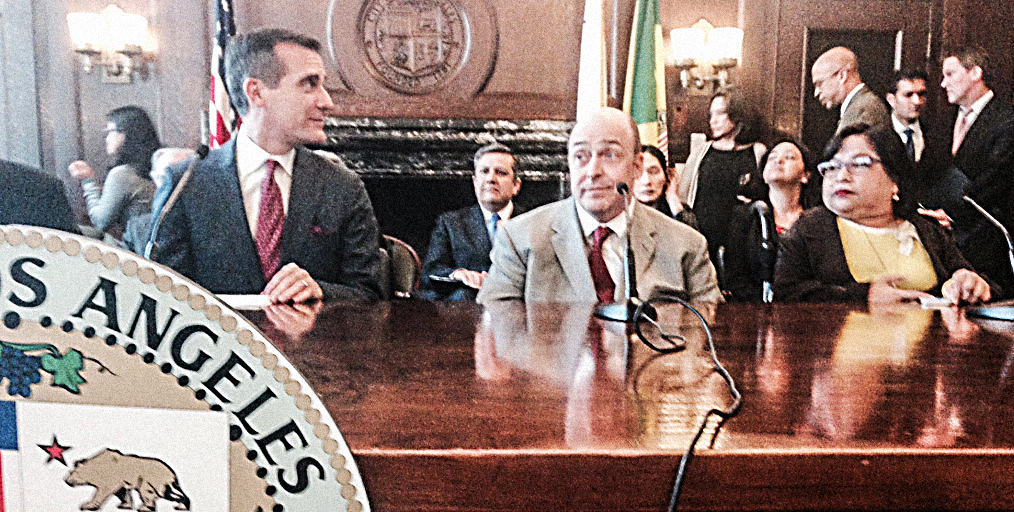 Lillibeth Navarro contracted polio when she was a baby but has nonetheless long been a vigorous advocate in the Disability Rights Movement and in California’s Independent Living Movement. And she's the founder of CALIF, Communities Actively Living Independent & Free, a nonprofit that addresses discrimination against people with disabilities. (That's Lillibeth in the photo above; she was a plaintiff in the lawsuit contending that LA's broken sidewalks and missing curb ramps impair the rights of people with disabilities.)

Since public transportation is the key to actively living independent and free, she’s always been a transportation advocate too. She was arrested no less than 40 times during the very long campaign for passage of the Americans with Disabilities Act in 1990, and during the struggle to get the American Public Transportation Association and its many transit and highway agency members to comply with the transit federal regulations for disability access in public transit.

Because of Lillibeth’s leadership, others in the disability rights and independent living movement have become key supporters of Measure M. The philosophy of independent living revolves around a core belief that there’s little that people with disabilities can’t do—they just have to do them differently—and since public transit, paratransit and safe sidewalks make it possible for people with disabilities to live full lives in their own homes and, in some cases, frees them from nursing homes or board-and-care facilities.

“I live in an urban community close to downtown LA so I have many transportation choices, and I am blessed to be able to take a DASH bus to the front door of my office,” says Lillibeth. “Yet getting to a store within rolling distance in my neighborhood can be a major challenge because of cracked sidewalks, no curb cuts, and wide and busy streets with fast-moving traffic. People in Los Angeles—not just people with disabilities—need to be able to move around on our streets without fearing for their lives.”

This is why Lillibeth became a plaintiff in the lawsuit contending that LA’s broken sidewalks and missing curb ramps impair the rights of people with disabilities and make it difficult for them to move freely around the city. “Most people have so many choices to get around—they can drive, get on transit, take a taxi or Lyft or Uber—there’s a whole world of transportation at their fingertips,” says Lillibeth. “People with disabilities are just beginning to enjoy some of this access.” The lawsuit was settled for $1.4 billion last year.

There are 170,000 people who use Access paratransit services in LA County and 300,000 recipients and providers of In-Home Supportive Services. (Many caregivers as well as the recipients of their services use public transit because they don’t make enough money to drive cars.) There are 90,000 people with developmental disabilities and another 400,000 people who have a disability that makes them eligible for health coverage via Medi-Cal. There are 88,000 people with what is called “low vision,” another 64,000 who are blind, and 25,000 who are deaf.

This constituency is being mobilized and is highly likely to vote for Measure M, which would: provide improved paratransit services (which are no longer available unless booked a day in advance); discounted transit passes not only for people with disabilities but also for seniors and students; and provide sidewalk repairs, curb cuts, Dial-a Rides, and better connectionsto bus stops and rail stations in all of LA County’s 88 cities.

“We believe that the opportunity to fully participate in the political, economic and social life of our community is a basic human right,” says Lillibeth. “The existence of a disability that inhibits personal functions is not, in itself, a reason to deny those rights. People with disabilities are regularly excluded from participating in mainstream American life and are-- though not necessarily intentionally--discriminated against.”

A vote for Measure M helps to ensure that people with disabilities are not discriminated against and can actively live independent and free!