Spotlight on the San Fernando Valley: The Orange Line Conversion to Light Rail 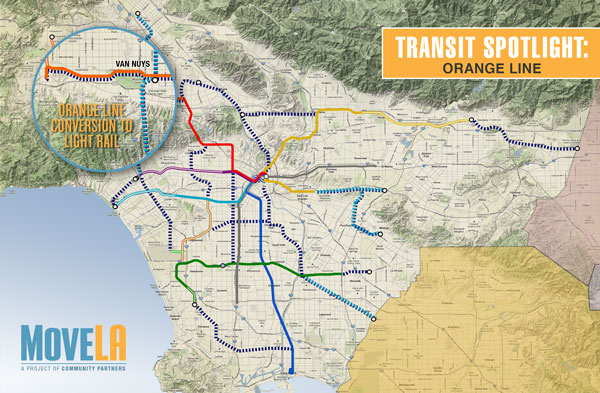 The Orange Line Conversion to Light Rail: This is the 3rd in a series on the San Fernando Valley transit corridor projects that are being discussed as contenders for funding from a transportation sales tax measure that could be put on the November 2016 ballot.

The Orange Bus Rapid Transit Line that crosses the San Fernando Valley from the Red Line station in North Hollywood to Chatsworth 18 miles to the west was an immediate success upon opening in 2005: Ridership tripled on the line during the first year and then climbed another 35% to about 30,000 boardings a day. The line’s success, however, means buses are crowded during peak periods, which has caused proponents to argue it should be converted to light rail.

Toward that end, last summer Governor Brown signed state legislation lifting a ban on non-subway transit construction in the San Fernando Valley (a ban put in place in 1991), and LA Metro agreed to study a variety of Orange Line upgrades. These range from traffic signal synchronization (to speed up the trains) and the use of more articulated buses (which are bigger and can transport more people), to building grade separations allowing the Orange Line buses to avoid traffic at intersections (the line passes through 38). The study is also investigating the option of expanding the line to Burbank, Glendale and to the Gold Line in Pasadena and, of course, converting it to light rail for an estimated cost of $1.2-$1.7 billion.

The Orange Line is said to be one of only 8 “true” BRT lines in the U.S. – buses travel almost entirely in what is an exclusive busway and are given priority in intersections (they travel through 38 of them) – and is hailed as an international best practice because it is both cost-effective and it works.

It’s important to note that there’s no funding available for these upgrades and neither is the project in Metro’s Long Range Transportation Plan. But the study opens the possibility that it might get funded by a sales tax measure that is being discussed for the 2016 ballot.

Also read about this in the LA Times.