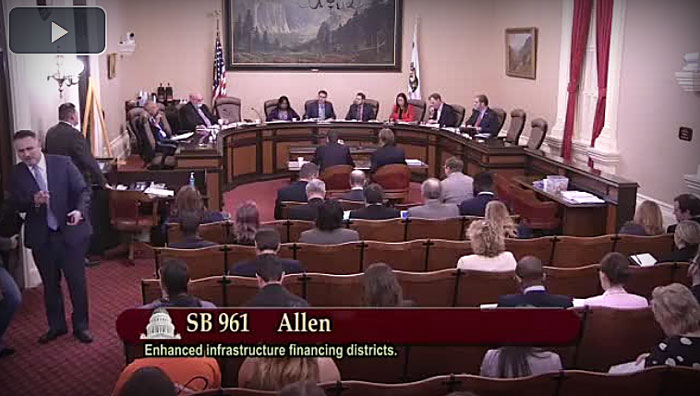 Move LA is sponsoring Sen. Allen’s SB 961, which won a unanimous bipartisan 13-0 vote in the state Senate Transportation and Housing Committee this past Tuesday, a week after winning a unanimous vote in Senate Governance and Finance. The bill would enable cities and counties to create special infrastructure finance districts near transit that can collect the property and sales tax increment within the district and bond against that revenue stream without having to seek voter approval—so long as 40% of the funds are used for affordable housing.

Senator Jim Beall (D-San Jose), the chair of Senate Transportation and Housing, had met with Senator Allen (D-Santa Monica) before the committee hearing to make constructive amendments to the bill that would ensure that its housing and infrastructure investment program was targeted to the bus transit corridors most likely to provide significant transit opportunities.

After the committee vote, Senator Beall then looked directly into the California Channel camera that films committee proceedings and made a direct plea to Governor Brown to accept the bill’s provision that removes the requirement for voter approval before tax increment proceeds from these districts can be bonded against. CLICK THE VIDEO ABOVE to see/hear Beall appeal to Governor Brown (via the California Channel) to accept the amendment.

Historically, voter approval has only been required when the bond might require increasing taxes (e.g., school bonds) or might require a city to pledge its general fund as security for the bonds (e.g., general obligation bonds). Tax increment financing bonds are backed by property taxes that grow as property values grow, and therefore neither raise taxes nor involve a city’s general fund.

The bill will now go to Senate Appropriations because there is a small amount of state funding proposed in the bill for evaluating the implementation of this program as well as other infrastructure financing districts.

If passed SB 961 would create “Neighborhood Infill Finance and Transit Improvement (NIFTI-2) Districts” in the half-mile radius around rail stations and along frequent bus corridors. Removing the voter-approval provision makes this infrastructure financing district much more likely to be adopted, would spend 40% of the increment on affordable housing, 60% on neighborhood improvements, and create new transit-oriented neighborhoods where transit riders could afford to live.

There are active conversations about a carve-out for investments in urban greening as well as active transportation to make a NIFTI-2 district a more attractive place to live in—and to develop housing in—and to ensure ease of access to transit. READ MORE ABOUT THE BILL HERE.