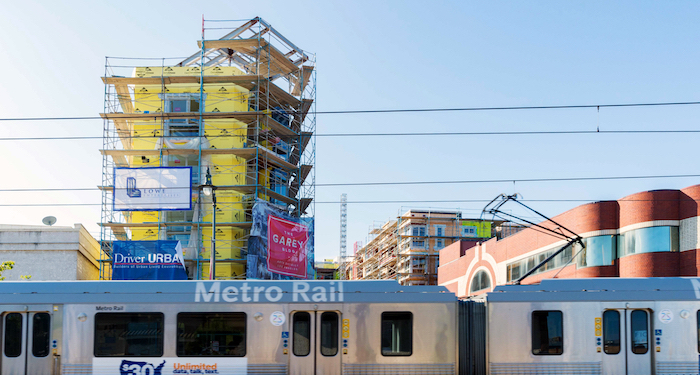 Move LA is very proud to be the sponsor of SB 961 by Senator Ben Allen with the goal of creating more housing in neighborhoods where transit riders can afford to live. SB 961 authorizes cities and counties to create tax increment financing districts—called "Neighborhood Infill Finance and Transit Improvement Districts" (NIFTI-2)—that dedicate 40% of the sales and property tax increment to build or rehab affordable housing around rail stations and along bus corridors. The bill will be heard in the Senate Governance and Finance Committee on Wednesday April 25 and we ask for your support (SEE BELOW)!

Community redevelopment agencies used a similar tax increment financing tool to make investments in "blighted" neighborhoods (20% of the increment went to affordable housing) before the agencies were abolished in 2011. Since then local governments have struggled to find new ways to finance improvements that spur private investment and economic development and, especially, to help build affordable housing. The legislature has responded by creating several kinds of infrastructure finance districts, but none with the affordable housing commitments of SB 961 or the ability to bond against the tax increment without voter approval—which makes it more likely local governments will enact them.

SB 961 would provide an important new source of funding to address the housing shortage that is displacing so many people and contributing to the suffering of those who are living on the streets. And because it will result in more affordable housing near transit stations and stops it will also help boost transit ridership by making it easier for the people who ride transit the most to live close by. Half the affordable housing would be deed-restricted for people making less than 60% of area median income (AMI) and half for those making less than 30% of AMI or who are homeless.

The rest of the revenue stream could be used for:

The ultimate goal? Affordable, walkable, bike-able, mixed-use, mixed-income transit-oriented neighborhoods (that's a mouthful!). Read the bill language HERE. Download a sample/sign-on letter HERE. And download our letter of support HERE. If you want to sign on please send me your name, or if you are representing an organization send me your logo: [email protected]