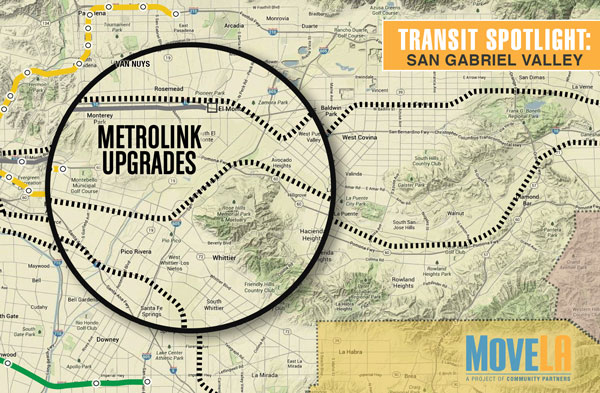 These Metrolink improvements could include:

There’s increasing interest in a rail connection to Ontario Airport – studies have been done and a planning exercise is about to begin -- and also in linking Ontario Airport to Union Station in downtown LA, especially now that downtown is in the midst of a major renaissance. A connection to Union Station would help entice travelers to Ontario Airport not only from the San Gabriel Valley but also from downtown LA and surrounding neighborhoods, because express service could make Ontario competitive with LAX in terms of time and convenience.

Moreover, it would increase the likelihood that Ontario Airport could convince some of the major Asian air carriers that have invested heavily in A380 jumbo jets to provide service out of Ontario – its runways are capable of serving these jets, which can land at LAX but only if runways are cleared and other air traffic is delayed to accommodate them. And the San Gabriel Valley has a very large Asian population along the east-west corridor between Ontario and downtown LA.

There has also been much conversation about the possibility of extending the Foothill Extension of the Gold Line to Ontario Airport. This will be a topic of conversation at our upcoming “Green Valley” conference with Mike Woo, dean of the College of Environmental Design at Cal Poly Pomona, this fall.