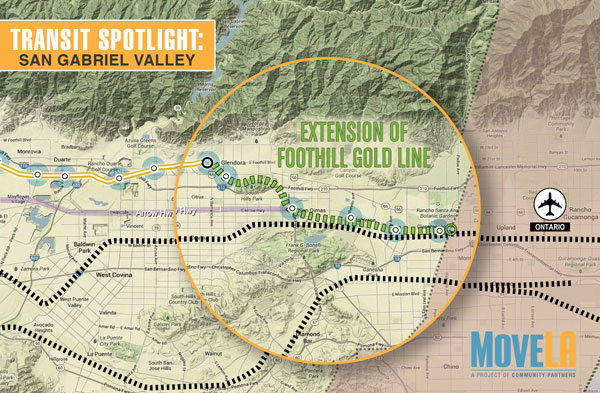 In late 2005 I took elected officials and city and agency staff from all the cities along the Foothill Gold Line to Portland — including Metro Boardmember and Duarte Mayor Pro Tem John Fasana — to talk to their counterparts in that city about transit and TOD and why these are essential transportation/land use/economic development strategies in the 21st century. There was buy-in from all of those on the tour, who returned to their cities and began making them transit-oriented — as is evidenced by development in Sierra Madre and Azusa, to cite two examples.

Extending the line as far as Claremont — which has also focused revitalization and redevelopment around the location of a proposed station in downtown — will provide an alternative to the often traffic-choked 210 freeway, help improve air quality in the San Gabriel Valley and reduce GHG emissions, and provide further opportunities for more sustainable development.

This extension also increases the likelihood that the transit corridor would eventually be extended past the San Bernardino County line to Ontario Airport (in Ontario), which is much more proximate and convenient to people who live in the San Gabriel Valley than either LAX or the Burbank Airport. Greater use of the Ontario Airport would not only bolster a regional approach to air traffic but it would also relieve pressures to expand LAX and provide economic development opportunities around service for both air travelers and air freight.

This is all part of a larger strategy to begin connecting downtowns and rail stations in a way that makes them a compelling locus for development in an environment that also encourages walking and biking.

This isn’t “small ball” but rather a very big transit-oriented play that has the potential to drive the economy in both the San Gabriel Valley and the Inland Empire, as well as to drive a significant shift in land use and transportation.