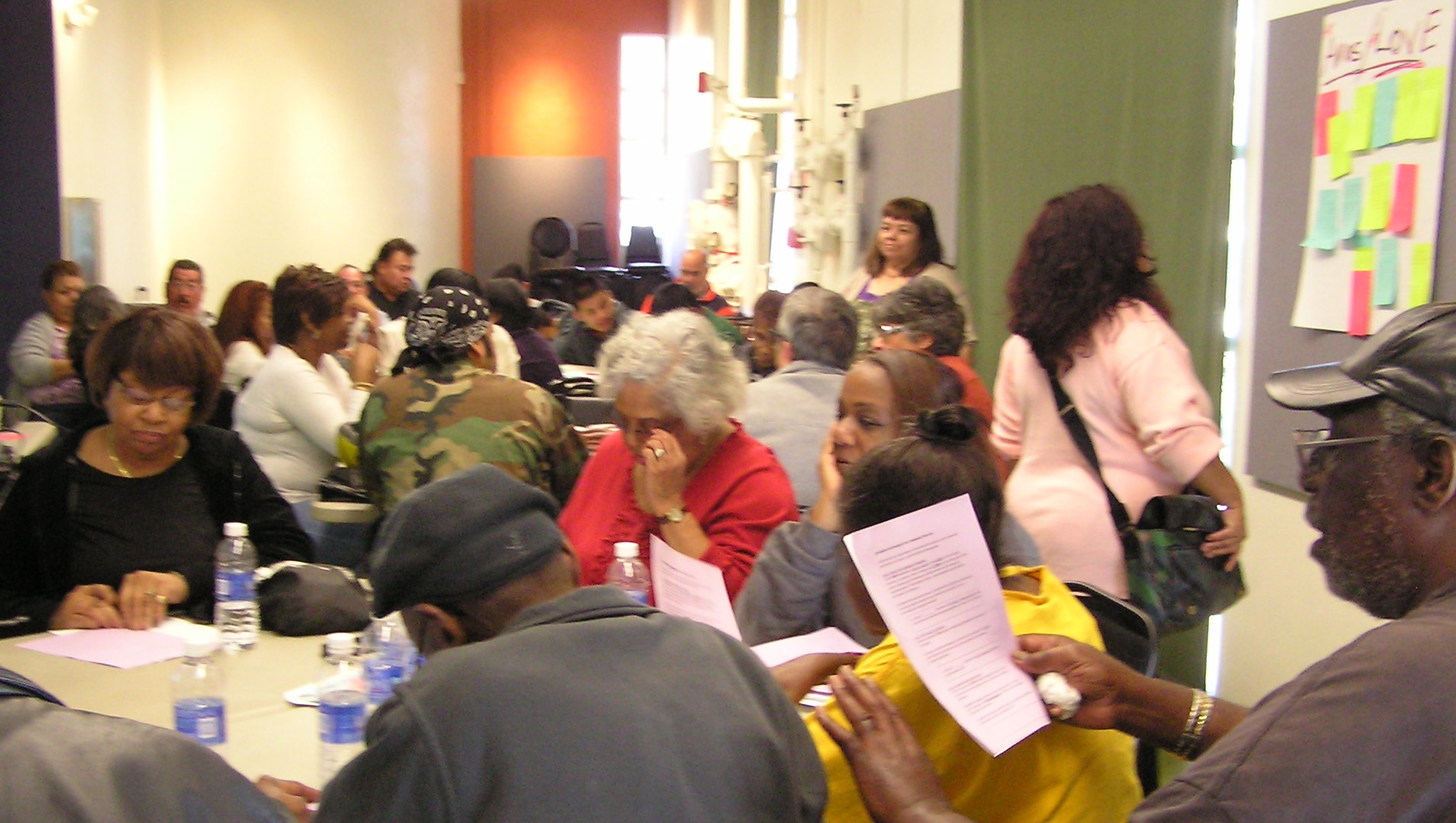 On a sunny Saturday morning in March about 35 members of the Alliance of Californians for Community Empowerment (ACCE) gathered at the community room at the Mercado La Paloma in South LA. They looked at local statistics on population growth, homelessness, and at numbers showing that families are doubling up to make ends meet, and then they tried to figure out how many new affordable apartments are needed in a wide swath of South LA over the next 10 years. Their conclusion: LA needs to build tens of thousands of new apartments just to take care of the people who already live there.

A week later 30 people from churches in central LA met in the basement of a church in Pico Union to learn about rent control and other policies to keep renters from being pushed out in favor of higher-income tenants or would-be condo owners. They were brought together by One LA, an interfaith organizing group that works on health care and immigration. Hands shot up when participants were asked if they had ever been evicted or threatened with eviction or knew of others who had. Within a couple of months One LA leaders were meeting with the Eviction Defense Network to learn more about how to join the fight against illegal evictions.

At Blessed Sacrament Church in Hollywood on a Tuesday evening in April, the talk was about the economics of building new apartments with affordable rents near transit. The people gathered here were members of LA Voice, an affiliate of the national interfaith organizing network PICO. Their homework? They were asked to go out in pairs and look for parking lots, rundown commercial buildings and other places where new apartment buildings could be constructed.

At another workshop hosted by the West Angeles Community Development Corporation in May those in attendance said they were interested in keeping traffic moving on Crenshaw Boulevard. Then these residents stepped outside for a short walk across Crenshaw, then up a few blocks and back to see the boulevard through a safe walking and bike lense. They witnessed a near collision between a bicyclist and a car and concluded that cars were driving way too fast and that it should be a priority to slow traffic and make the road safer for everyone.

The point of all these workshops was to explore the changes LA’s transit expansion may bring to low-income neighborhoods, where transit enjoys broad support but there’s also growing concern that residents will get priced out. Similar workshops have been staged by the East LA Community Corporation and Little Tokyo Services Center, and all are part of the “TOD University,” a project of the national nonprofit Enterprise Community Partners, funded by HUD, and done in partnership with Move LA, Reconnecting America, and Strategic Actions for a Just Economy (SAJE).

The workshops are designed for those with no formal training in planning or development. The goal is to help residents understand the complex interplay of public policy and real estate markets so that they’ll feel comfortable weighing in at public meetings to get community input on the changes that are imminent in their neighborhoods.  Discussion topics also include:
*  how to orient new development so that it leverages transit;
*  the magnitude of the City of LA's housing problem;
*  places that might be good for development in a city that already seems over-developed;
*  hot and cool real estate markets and appropriate development policies for each;
*  how to make neighborhoods safe and enjoyable for walking and biking;
*  how the city spends its federal economic development dollars;
*  understanding LA City’s zoning code and how it limits the height, setbacks and floor-to-area ratio of buildings.

These popular education workshops seem successful. When participants were asked how they would use what they learned, one said she wouldn’t be so shy about speaking up in public, and another said he “will try and make others aware and get them on board so that everyone can have a better city to live in.”

All eight “courses” of the TOD University are available in Powerpoint format, are open-source, and can be downloaded HERE and tailored to the issues in particular neighborhoods. Groups are encouraged to tailor the course selection and the presentations to the issues confronted their own neighborhoods, while learning about conditions and policies across the city. The "courses" are:

TOD 101: Introduction to Transit Oriented Districts, Metro’s expanding bus and rail system, the steps to making a place more people and transit-oriented, and the agencies involved.

Planning Basics 101: Provides an introduction to planning terminology and concepts, who makes planning decisions, the path from idea to policy, local examples of successful community campaigns.

Complete Streets 101: Looks at how to make streets safe and accessible for everyone, the benefits of pedestrian and bicycle infrastructure, complete streets, road diets, bicycle boulevards, streets for people, a walk-about.
Uncategorized archives
Do you like this post?
Tweet
Tweets by @MoveLATransit