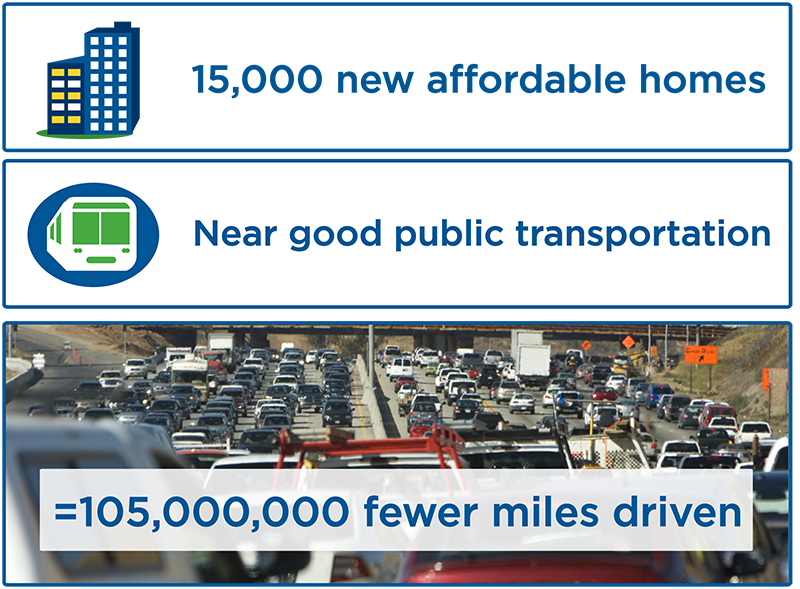 The study, entitled “Why Creating and Preserving Homes Near Transit is a Highly Effective Climate Protection Strategy," was conducted by the Center for Neighborhood Technology for the Oakland-based transportation nonprofit Transform and the California Housing Partnership. It estimates that investing 10% of  Cap & Trade revenues in affordable housing over 3 years would result in construction of 15,000 affordable homes. Because the families who live in those homes drive less this investment would reduce driving by 105,000,000 less vehicle miles per year, reducing GHG emissions by 1.58 million metric tons.

The study was released on May 15th and highlighted at a press conference in LA on June 6th with outgoing Senate President Darrell Steinberg and incoming Senate President Kevin De Leon, LA Mayor Eric Garcetti, LA Metro officials, and Transform Executive Director Stuart Cohen. “This report gives our leaders the robust evidence they need to tackle climate change in ways that keep California affordable and connect people of all incomes to opportunity,” Cohen told reporters. “California can be a leader both in solving our climate crisis and creating healthy communities for all.”

Matt Schwartz, president of the California Housing Partnership, said in a press release that “This report makes clear the importance of ensuring that lower-income Californians are part of the solution to our climate change challenge and not just pushed out of our state’s transit rich areas as they are developed. Affordable homes near transit must be a priority in the state investment strategy, not an afterthought.”

A recent study for the City of LA’s Housing and Community Investment Department found that 75% of all transit commuters – people who use transit regularly to get to work -- live in households that make less than $25,000 a year, highlighting the importance of ensuring that housing near transit remains affordable.

“Why Creating and Preserving Homes Near Transit is a Highly Effective Climate Protection Strategy" is available HERE.
Uncategorized archives
Do you like this post?
Tweet
Tweets by @MoveLATransit