THE MOST ICONIC TRANSIT PROJECT OF ALL BEGINS . . .

posted by Gloria Ohland | 579mp
November 13, 2012
Utility relocation began today on the Westside Subway Extension, which should have been the 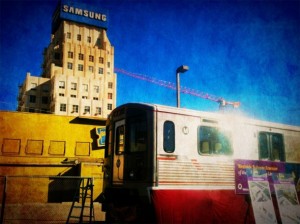 first rail project built in the estimation of many transportation experts who in the 1980s were assessing which corridors had the highest densities and would provide the highest ridership. According to the subway timeline a construction contract will be awarded in 2014, tunneling will start in 2015 and the first segment from Wilshire/Western to Wilshire/La Cienega will open in 2022 or 2023.

At the press conference Mayor Villaraigosa said that since Measure J lost at the polls last week he is working on "Plan B" to accelerate transit projects, including the subway. Denny Zane added that Measure J is sure to become the "poster child" for eliminating the supermajority needed to pass local sales tax measures, saying where else but in California would 65% of the vote be considered a defeat instead of a landslide victory.

Steve Hymon was there: The Source