posted by Gloria Ohland | 569mp
January 30, 2014
Brad Plummer writes on The Washington Post wonkblog that since 1999 the U.S. Department of Transportation has consistently predicted that vehicle miles traveled, or VMT, would rise dramatically, when in reality the opposite has happened. 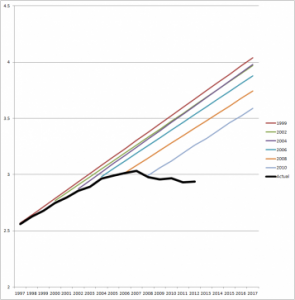 There's still lots of debate on why this has happened and whether it's due to temporary factors such as the recession. But what's notable, Plummer points out, is that the agency has continued to predict significant increases -- even though the divergence with reality is significant.

This matters because these predictions distort planning decisions -- when policy makers think we need more road capacity they commit funding to add it.