A coalition with cultural and political maturity

At Move LA we believe that the broad-based coalition on display at Union Station on April 22 creates a very special moment of opportunity for planning another transportation sales tax for November 2016.

The opportunity is in no small measure because — and our conference confirmed this — there is a coalition of very diverse interests that has built enough rapport that no one seems to have a “take it or leave it” point of view when it comes to priorities. 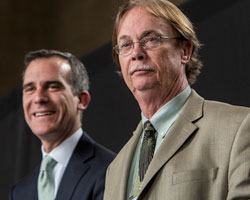 Major business community leaders are in — from the LA Chamber of Commerce to the LA Business Federation to the Valley Industry and Commerce Association. Major labor organizations are in — from the LA County Federation of Labor to the LA-OC Building and Construction Trades Council.  Environmental leadership is in — from Climate Resolve to the Angeles Chapter of the Sierra Club to the Coalition for Clean Air. And they are all at the table with the faith community, students and community college leaders, people with disabilities, social equity and public health advocates, and arts organizations.

A clarity has developed that this coalition has many compatible priorities.  This cultural and political maturity has given its leaders the confidence to be flexible — which is very important when winning requires a 2/3 supermajority vote.

This potential for a cohesive coalition should not be taken for granted; fragmentation can happen as leadership changes and new issues come up. But it seems there’s been a convergence of priorities, not because people are compromising by giving ground but because there is common ground — which motivates people to be willing to give ground, further enhancing cohesion.

Moreover, our annual conference provides opportunity for a very public display of the willingness of coalition members to work together, and people feel more obliged to live by commitments made in public.

Our conference also made it clear that there’s a lot of aspirational thinking going on about our transportation future. 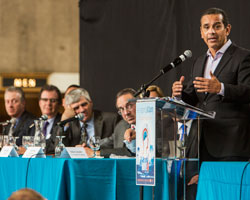 Yes, the demographics of the 2016 electorate will be crucial to our chances of winning, and a high-turnout presidential election should give us a favorable electorate. The improved state of the economy will be important  — though voters passed Measure R by a 2/3 majority in 2008 even though the Great Recession had already begun.

Public confidence in LA Metro will be important, too. By 2016 the Orange Line extension to Chatsworth will have been open 4 years, Metro will have opened both the Expo Line to Santa Monica and the Foothill Extension of the Gold Line to Azusa, and 3 more lines will be under construction – a compelling scenario for promoting that public confidence.

Still, a lot can happen between now and November 2016, and we think the smart play is that Metro should prepare now, by developing a Long Range Transportation Plan that sets priorities for 30, 40 and 45 years. But we should wait another year before deciding if 2016 is truly right, whether it should be a 30-, 40- or 45-year sales tax or one with no sunset, and what the expenditure plan should be.

The need, the opportunity and the risk 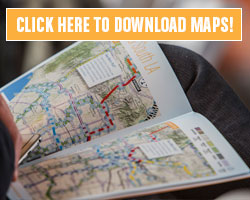 But we have proven that they can be complementary — that there is a program of investments in transit and active transportation and community building that improve the environment by reducing air pollution and greenhouse gases, and that improve the economy by creating jobs, reducing traffic and literally keeping the economy moving.

Manuel calls this the “sweet spot,” and our coalition strongly supports it and voters have twice demonstrated their support: in 2008 by voting for Measure R by a 2/3 majority, and in 2012 by nearly winning Measure J — which would have extended the Measure R sales tax — with 66.1%.

Great things can happen because leader are willing to take risks. We believe that our biggest risk is that we might fail to seize this special moment of opportunity.