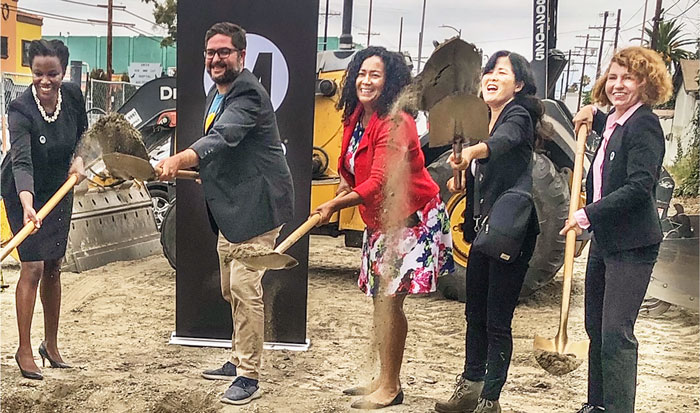 This story goes back almost a decade when it was proposed by then-Supervisors and Metro Boardmembers Mark Ridley-Thomas and Gloria Molina. (Sahra Sulaiman of Streetsblog has documented the project's long journey.) The project was to have moved forward with funding from Measure R and a $15 million Federal TIGER Grant, with an estimated 2019 opening. But it hit several bumps in the road as costs began increasing once soil samples were taken and the state of street infrastructure at each crossing was assessed.

The reality is that Los Angeles does not have the infrastructure people need to bike, walk and roll safely. This year saw an epidemic of traffic fatalities in the city—nearly a 20% increase over last year and the highest level seen in decades.

The City found nearly half of its “High Injury Network” streets—those with a high concentration of traffic collisions with pedestrians and cyclists—are in communities already burdened with the poorest health outcomes and economic conditions, a majority of them in South Los Angeles.

In this video Move LA Executive Director Eli Lipmen speaks with CBS Los Angeles about why the Rail-to-Rail Active Transportation Corridor will save lives in communities like South LA.

We began working with staff at Metro, the Mayor’s office, Supervisor Ridley-Thomas, and Councilmember Curren Price (thanks to great staff work by Julia Salinas, Fernando Ramirez, Karly Katona and Shaellen Franco) to re-bid the project and find additional funds. In early 2020, we were happy to hear that Metro would be going out to bid on the project . . . but then the COVID pandemic hit.

In a memo to the Metro Board, Metro CEO Phil Washington wrote that the Rail-to-Rail Project was put in a “wait-and-see” bucket of projects until the scope of the pandemic was better understood. So Move LA mobilized the SLATE-Z community, sending a letter to Metro signed by more than 20 community groups in July 2020 requesting the agency to continue moving the project forward.

In response, the Metro staff got creative—even though we were in the middle of a historic pandemic—and started removing soil and old rails from the corridor by extending an existing contract for hauling waste (thanks to Metro staff members Brad Owens and Heather Repenning). Metro also applied for Measure W funds to address other issues and make the project more resilient, and advocates showed up at multiple meetings to eventually win the funds.

As the project gained momentum, South LA political leadership stepped up to find funding. Congresswoman Karen Bass requested federal funds, and Supervisor Holly Mitchell prioritized federal American Rescue Plan funding for activities that address  disproportionate environmental or public health issues in underserved communities (thanks to great work by staff members Jacqueline Hamilton and Lily O’Brien). Councilmembers Curren Price and Marqueese Harris-Dawson introduced a motion requesting $30 million for the project, and once again SLATE-Z and Move LA mobilized support. In January 2022 Metro staff proposed a “Life of Project” budget to the Board, and it was approved to move forward.

The Rails to Rails project is expected to open in 2024 and it is hoped that SLATE-Z will win additional resources from the state's Transformative Climate Communities Program—an application was just submitted that could win up to $35 million with $25 million in matching funds to spend on free monthly transit passes for all low-income, K-12 students, and seniors/people with disabilities for five years, electric vehicle car-sharing and e-bike library, 6,000 trees, solar panels, cool roofs, cool pavement, two acres of school greening, four miles of neighborhood bike network improvements and first/last mile improvements, workforce development, and more!

This is the type of in-depth collaborative work that Move LA does with partners like SLATE-Z, LA Walks, LA County Bicycle Coalition, FASTLink DTLA, Metro staff, and elected officials to use Measure R and M funds and build projects that communities need for daily commutes and trips to school, grocery stores, etc. And even though it took several years, the victory of breaking ground on this project was ever-so-sweet!