posted by Gloria Ohland | 569mp
January 30, 2014
Walkscore is a website that calculates the pedestrian-friendliness of neighborhoods and cities, and it's a crude measurement at best. Still . . . what fun! LA scored 50 out of 100 points as the 9th best city for transit, beating out "snobby" Portland (with 49.6 points compared to LA's 49.9), but coming in after "old-timey" Baltimore with its legacy rail system. (Using the words of Curbed LA's blog post.) 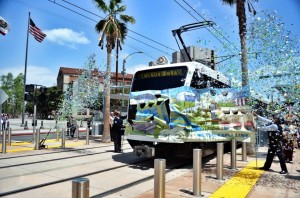 And, the Walkscore blog notes, there’s growing evidence that buying a house or renting an apartment near public transit is a smart idea:
1) It's likely a better investment. The National Association of Realtors found that home values performed 42% better when they were located near public transit.  In Boston, a recent study showed that home prices near public transit outperformed the region by 129%.
2) Living near public transit saves you money. The average American spends $9,859 per year on their car. Did you know this is the equivalent of a $135,000 mortgage?!  Transportation is the second largest expense for American households.
3) And living near good public transit might just make you happier — after all, nobody likes being stuck in traffic.