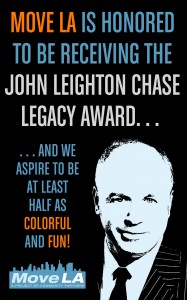 Move LA is being honored for our transportation advocacy work. In 2007 former Santa Monica Mayor Denny Zane recognized the opportunity created by first term LA Mayor Antonio Villaraigosa's commitment to build out LA's transit system. In January 2008, with the help of the Annenberg Foundation, Zane convened a “transportation conversation” with major stakeholders, and including a pollster and a political consultant. It was the first convening of what would prove to be a powerful coalition of interests, and it was decided on that fateful day to mount a campaign to get a county sales tax measure on the ballot . . .

Friday, June 7, 2013 at Casa del Mar, 1901 Ocean Way, Santa Monica. For sponsorship info or to purchase tickets go to westsideurbanforum.com.
Uncategorized archives
Do you like this post?
Tweet
Tweets by @MoveLATransit