Why is the New Crop of Mid-Rise Housing Complexes in DTLA So Ugly? 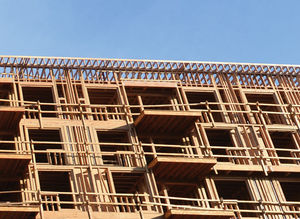 Yes LA's convoluted permitting process is party to blame, wrote Eddie Kim in the Downtown News in August 2014—a long time ago, yes, but good to know now that all these buildings are coming out of the ground!—in which he quotes SCI-Arc Director Eric Owen Moss saying DTLA's aesthetics is damaged by this homogenous look. “It trivializes architecture and planning and makes the art of creating buildings all about superficial decoration,” Moss said. “It’s pathetic, considering the amount of stuff being built.” The problem is these new buildings are Type V wood-frame construction; anything taller than 7 stories requires a steel frame, raising costs considerably (and meaning projects less than 20 stories didn't pencil out in the aftermath of the Great Recession—when many of them were financed). The upside: They won't last long and will get torn down as the value of land climbs, making taller buildings more financially feasible. Until then, recommends Gensler's Rob Jernigan, the priority should be buildings that engage the public and create a neighborhood. “Green space, bicycling, open air, green roofs, more operable windows—we don’t deliver on this stuff enough,” Jernigan said. “We really need to push the street experience, too. This is a city where you can eat and play outdoors 12 months a year. That’s the character we need to promote." Read the story here.