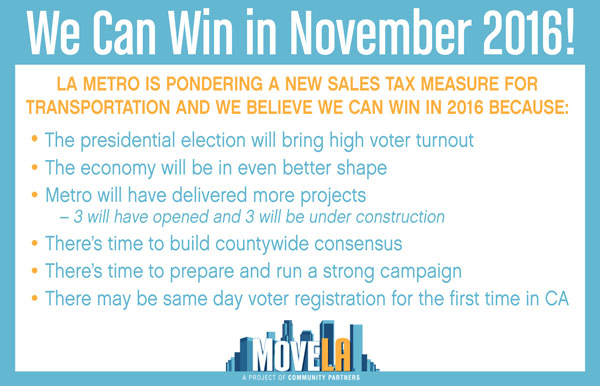 LA Metro is pondering a new sales tax measure for transportation on the November 2016 ballot. These are the reasons that we think a 2016 ballot measure would attract the required 2/3 "yes" vote:

1) A presidential election gets the highest voter turnout, and 2016 voters are likely to support funding for public transportation.

2) The economy is continuing to improve, which is likely to make voters more comfortable with a new investment.

4) The Measure J sales tax was a near-win on the 2012 ballot, falling short of just 15,000 votes. We believe that it didn't win in large part because the campaign started late, and there wasn't enough time to educate voters on what the measure would achieve. But Metro and major transportation stakeholders across LA County began discussing the possibility of a new measure last year -- so there's lots of time left to build countywide consensus on a ballot measure that could win.

5) There's also time to prepare and raise money for a strong campaign.

6) California's landmark same-day voter registration law is likely to be implemented before November 2016, which means voters could go to the polls, register for the first time, and vote! This could increase voter turnout and make it easier for a new sales tax measure for transportation win the required 2/3 majority it would need to win!