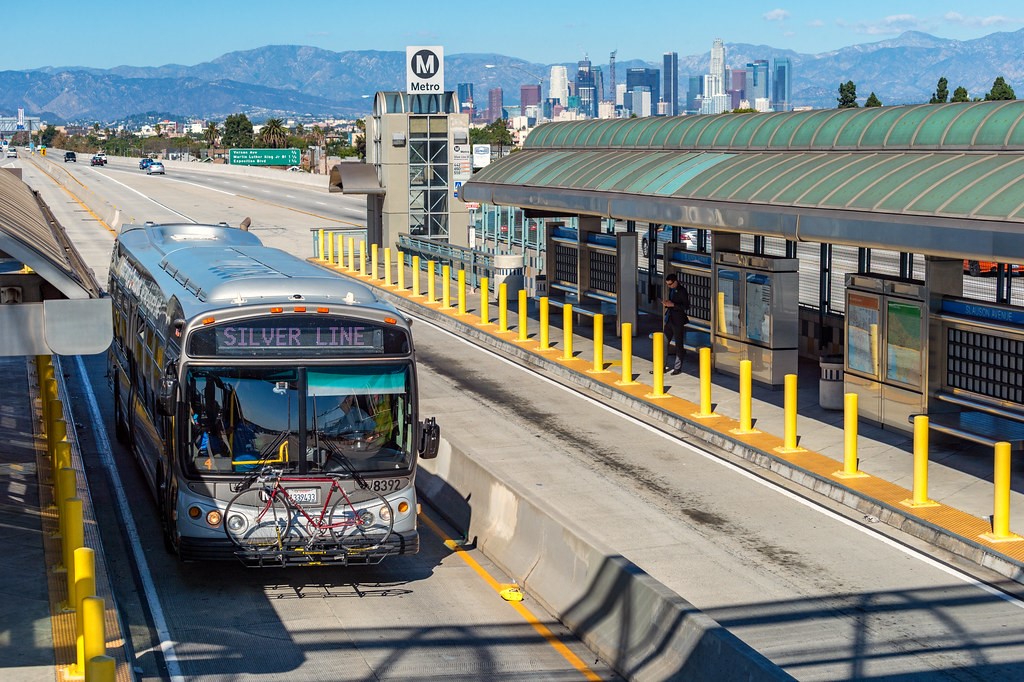 You may have heard of EcoRapid Transit, the Sepulveda Pass Line, or the Green, Gold, and Crenshaw Line extensions projects. These new rail projects, along with dozens of others being completed or in the works, will all have transformative benefits throughout LA County. And all of them were included in Measure R (2008) and Measure M (2016) and supported by voters.

But as we settle into the “new mobility normal” with fiscal austerity necessary to ensure transit continues to provide vital service to lifeline riders, it is now more important than ever to appreciate LA Metro’s Bus Rapid Transit (BRT) vision.

BRT is a high-capacity bus transit service that operates on dedicated lanes and has speed, reliability, and capacity much greater than regular buses, though less capacity than light rail.  But BRT is far less costly than light rail to create.

And, BRT will create jobs and can help get our economy moving again. It is one part of the solution to our impending climate crisis (less than a decade away from irreversible harm).

And we already have BRT of our own.  Metro’s Silver and Orange Lines are BRT and arrive on-time around 90 percent of the time. When Metro launched a bus-only lane on Flower Street in May 2019 during the temporary Blue Line rail refurbishment, the 1.8-mile lane was carrying 70 buses per hour with zero complaints. It is still carrying 45 buses per hour through one of the most traveled corridors.

The Orange Line in the San Fernando Valley (with a dedicated BRT lane) had 22k-25k daily boardings last year, which exceeded Metro’s projections of 20,000 by 2020. And when the Orange Line opened in 2005, it more than tripled Metro’s initial projections. Metro is currently converting this route to an all-electric Bus Rapid Transit corridor, making it cleaner and improving air quality in the San Fernando Valley.  And Metro is evaluating 30+ corridors for Bus Rapid Transit in LA County based on the criteria in this image (and Metro website). 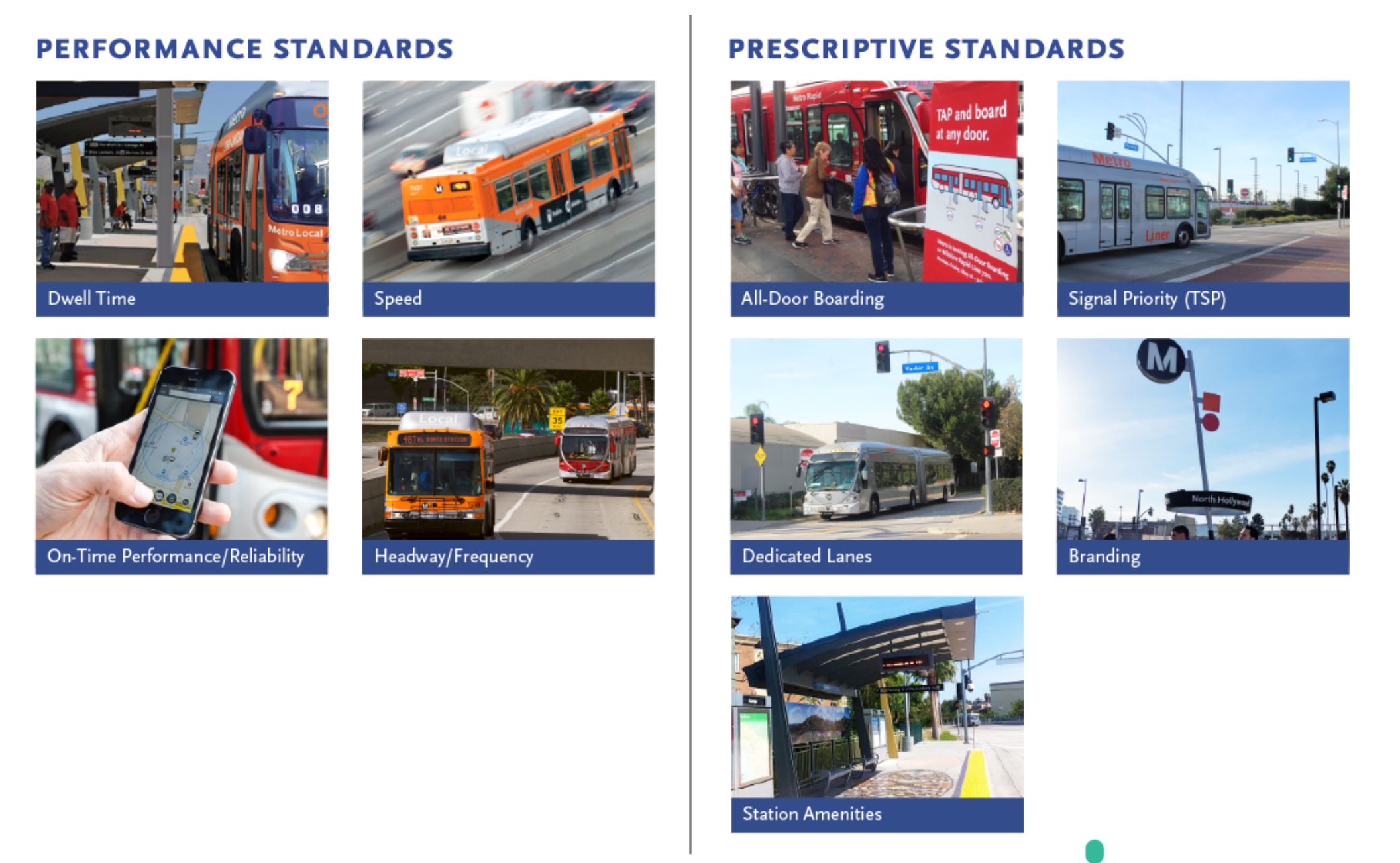 Why is Metro considering Bus Rapid Transit? Well, it just makes sense. The Institute for Transportation & Development Policy has a good backgrounder on what BRT is (and isn’t) and what it looks like in practice.

Here in Los Angeles, more than 22% of Metro buses are slowing down because of traffic—an analysis by Aaron Mendelson of KPCC found that more than 22% of buses now run late, whereas buses that run on a dedicated lane, like the Orange Line, are late only 5.4% of the time. On-time performance matters to bus riders and dedicated lanes for BRT would significantly improve the reliability of service.

The Transportation Research Board did a study of BRT systems in the U.S. and found that BRT lanes on arterial streets typically save 1-2 minutes/mile and notes “the time savings are greatest where the bus routes previously experienced major congestion. Pittsburgh, for example, has reported travel time savings up to 5 minutes/mile during peak hours.”[1] The time savings increases the reliability of service, which makes planning easier for both the agency and the riders who rely on the service.

The TRB report also found, “[The] development benefits with full-featured BRT are similar to those experienced along rail transit lines,” including the investment of hundreds of millions of dollars around major stations. For example, the report finds, “property values near Brisbane’s South East Busway grew 20%, which is largely attributed to the busway construction.”[2]

In addition, BRT lines cost less and take less time to construct than light rail lines and can cost the same or less to operate per passenger. For instance, Metro’s Orange Line cost about $23 million/mile (in 2003 dollars) versus $337 million/mile for the Red Line subway. BRT lines can sometimes also allow for more capacity during peak service as it is easy to add more buses to the line to accommodate more riders (such as the Flower Street example).

Finally, BRT can convince more people to switch from driving and greatly increase corridor ridership. For instance, Boston’s Silver Line Phase I experienced a 96% increase in weekday corridor ridership, with a quarter of new riders previously using other modes, and one-third of riders on Pittsburgh’s West Busway used an automobile previously.[3]

LA Metro understands all this and has been planning a network of BRT corridors that connect the County. They have analyzed the top 30 highest performing corridors (see image) and are working on assessing these corridors to shorten the list to 3-5 priority corridors for recommended BRT implementation. These are in addition to the BRT projects already in planning in the North San Fernando Valley and the North Hollywood to Pasadena lines. 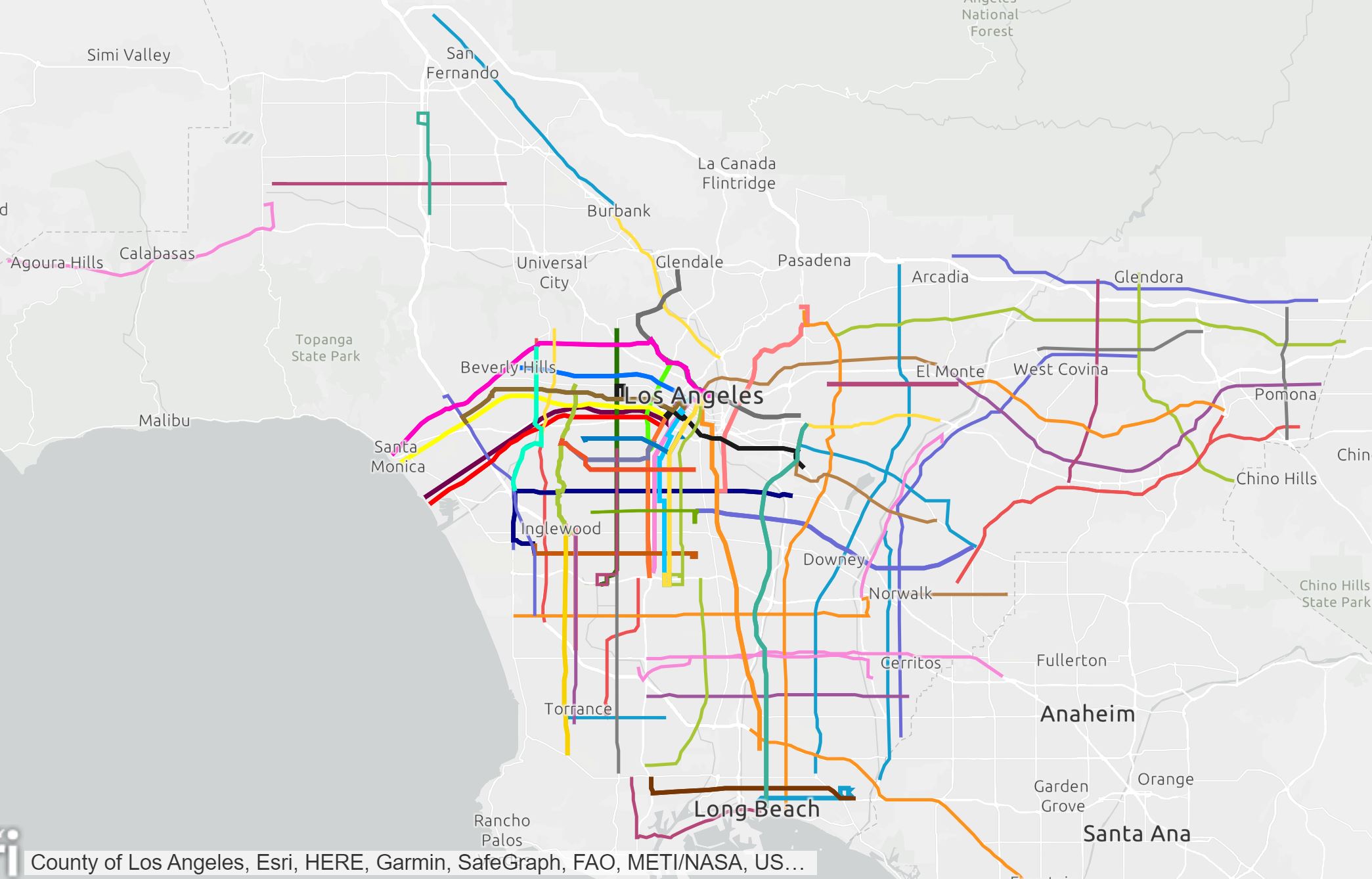 Of course, a lot of things have happened to public transportation since the stay-at-home orders. However, ridership during the pandemic might actually be the perfect indicator for which corridors are considered "essential" for lifeline riders--they very people who rely on public transit and are essential to keep our lights on, shelves stocked, and hospitals and clinics open. For instance, one of LA County's largest municipal bus operators, Foothill Transit, has seen consistent ridership on Lines 187 (Pasadena to Azusa), 280 (Azusa to Puente Hills Mall), 291 (Pomona to La Verne) 486 (Pomona to El Monte Station), 492 (El Monte Station to Montclair Transit Center) and the Silver Streak (Downtown L.A. to Montclair Transit Center). Shouldn't we help these essential workers get to their jobs on time by assessing whether such corridors might work for BRT?

The California Air Resources Board has stated that Californians must reduce single-occupancy vehicle travel by 1.6 miles per person per day to reach our ambitious climate change targets. We cannot achieve that ambitious goal without the humble but effective bus. The bus is the testing ground for zero-emission technology—whether battery-electric or fuel cell technology—that commercial enterprises (especially the trucking industry) look to to learn whether the technology can stand the test of hundreds of thousands of miles under load. And, furthermore, with the CARB mandate for all transit agencies in California to have a zero-emission fleet by 2040, what better time than now to quickly and inexpensively create jobs and zero-emissions transit when we need it more than ever?

For the millions of LA County residents suffering from the economic, social, mental, and physical impacts of this pandemic, now is the time to invest in transit accessibility, speed, frequency, and reliability with Bus Rapid Transit.