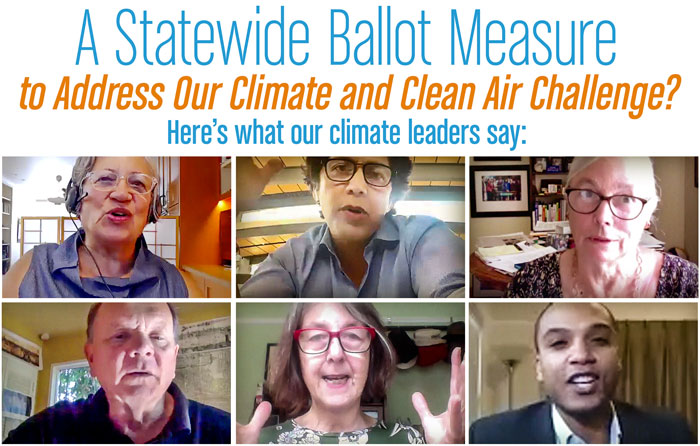 Move LA is launching a statewide effort as Move CA, and together with our Northern California partner SPUR we are investigating the possibility of a voter initiative measure on the November 2022 ballot to raise the funding needed to meet California's vital climate and air quality goals while building a just and equitable economy.

On Thursday, Oct. 1, we were joined by 11 climate leaders and nonprofit partners and an audience of several hundred to talk about the ballot measure and the priorities that it should fund. The discussion was energetic, impassioned and very welcome, especially given the fires and high temperatures we’ve experienced in California so far this year.

Below are remarks made by our first panel of current and former elected officials and agency leaders, which we will follow up with remarks made by directors of several nonprofits. If you'd like to listen to the entire two-hour conversation CLICK HERE, or there's a 30-minute HERE. Over the next several weeks you will hear more from us on this topic.

Mary Nichols, Chair of the California Air Resources Board:

“When Denny asks me to participate in one of his convenings, I don't think I ever have said no. I believe that what he's about is what we need to be talking about right now and that is how to raise a boatload of money to facilitate the transition that we know needs to happen: The targets for greenhouse gas emissions must go 40% below 1990 levels by 2030. [We must] also set a goal for reducing our short-lived climate pollutant levels, which as was pointed out earlier is maybe even more important because it's something that we can accomplish faster.

So, the ballot initiative has to be really big and it also has to be long-term enough so that it will attract private investors because . . . nothing that we're talking about could be solely financed by public funds.”

“The timing is really important, in fact, the timing following the continuing problem with wildfires and drought and winds and loss of property, and the list goes on and on. And the worst smog I've seen since I grew up in the San Fernando Valley in the '50s and '60s.

So, what would be my priorities? First, it has to be mobile emissions in California because [these are] 40% or more of our emissions. If you live in the LA area, the Bay Area, anywhere, mobile emissions are absolutely critical. Second, would be [reducing] the short-lived climate pollutants. This is the challenge in reaching SB 32 targets by 2030. We have to do more in this space and accelerate what we do.

Whatever we do—the whole suite of policies as well as regulatory moves as well as moving forward ballot initiatives—we have to do it with a sense of urgency because we frankly have no time to waste. We in California need to continue to be the national as well as world leaders.

The first order of business is getting diesel trucks off the road. Second, is you've got to build out charging infrastructure for passenger cars. The infrastructure has to be there. I'm not picking winners or losers between electric, you know, and clean electrons or hydrogen. I like it all. I like all of the above.

It’s absolutely critical, especially in low-income communities throughout California, that infrastructure has to be built out. I also would add a robust cash incentive program, a rebate program for those of lowest economic means, which is absolutely critical . . . We'd be truly mistaken if we approached this as an add-on. It has to be hard-wired because the working class is sizeable in California.

I've been focused a lot on waste reduction and energy efficiency because we've got some very defensible 2050 goals that are backed by all of the science. But if you really study those goals carefully, you realize that if we don't make a sufficient down payment in the next 10 years, honestly, what happens after that might not matter. So focus on the super pollutants because of their short-lived nature and immediacy.

But [we must] also make the down payments we need on transportation, which I think this measure would do in spades. I'm a big fan of what you've put together here. I think this is exactly the right measure we need.

So getting moving on funding . . . [and making a] transition to a clean transportation system faster, the down payment has been made in some ways . . . there's a lot of charging infrastructure, there's already a lot of battery cars. We're now starting to see hydrogen pick up. But that's not going to be enough.  That's again where I think this measure is so crucial.

[We must] fully phase out diesel . . . because it is the most harmful—from a health point of view—of our pollutants, and we can do it for light and heavy duty [vehicles]. And we have to focus on delivery vehicles as well as long-haul trucks.

The other thing we need to invest in critically is green hydrogen. We are now—thank you, Kevin de León, thank you Senator Pavley, thank you so many of us—on track for 100% generation of electricity from renewable sources.

But during certain times of the day we are producing excess electricity from solar and other sources. We could use that excess electricity to produce green hydrogen. Then we would have a zero-emission hydrogen source. Hydrogen is the most flexible of all of our power sources, whether for transportation fuel, or for storage. We've got to move in that direction.

The thing that is not on the table yet, and this is not to diminish anything anyone else has said, is housing and land use . . . Without housing on the table—and in this plan—we are not going to get what we need fast enough . . . So I would put, if we are talking about $30 billion, $10 billion of that towards making sure that we have housing that people can afford near job centers.

We need to advance equity and justice, which in the context of the measure being proposed means empowering disavantaged communities—and all communities—to be part of the transformation to a green economy . . . The California Scoping Plan for achieving our climate goals encourages us to take a more holistic and integrated approach—to not just work sector by sector.

At the Strategic Growth Council . . . there is a program called Affordable Housing and Sustainable Communities that funds affordable housing near transit, combined with pedestrian and transit-oriented infrastructure. There's also a program called Transformative Climate Communities that combines equity and partnerships with community-based organizations, local governments and industry to take a longer view on selecting projects that grow communities in a carbon-neutral fashion.

TCC funds green infrastructure, affordable housing, bicycle infrastructure, car-sharing and other clean mobility options as well as workforce training. It does this through community benefit agreements with memorandums of understanding and partnerships that are locked in—so the money must be spent through partnerships that ensure the equity goals defined by the community are met as we reduce GHGs.

The more we can think about investments in an integrated way the better off we’ll be in meeting our 2045 goals—which is really thinking about a cleaner economy across the board. There needs to be a just transition in place through all of these investments. We need to focus on pathways for our labor force so that good quality jobs are attached to a clean economy. We have to work with regional partners and businesses and regional economic development plans—building the buy-in for a clean economic transformation depends on it.